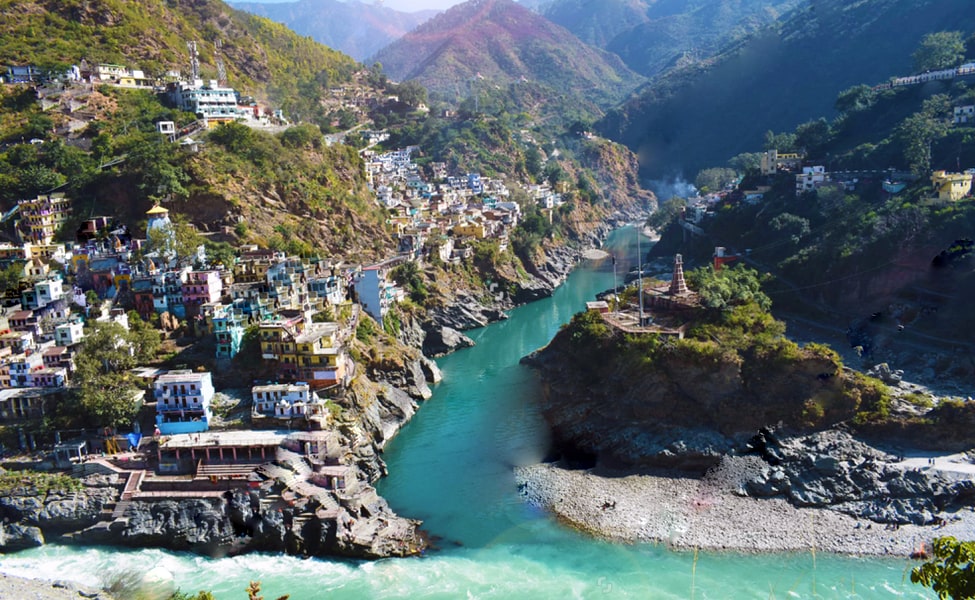 Devprayag – See the Holy Confluence and Ganges come to life

Devprayag is a small town in Tehri Garhwal district of Uttarakhand. Devprayag is situated 850 meters above sea level. Devprayag is one of the five confluences (or as it is called in Hindi, Panch Prayag) of the Alaknanda River where Alaknanda and Bhagirathi meet to form the Holy Ganges. The name of the town comes from the word “Devaprayaga” which translated to ‘Godly Confluence’ in Sanskrit. Devprayag is primarily divided into three parts: ah Bazaar, Beech Bajar, and Shanti bazaar. Devprayag is around 70 kilometers for Rishikesh, another important part of Uttarakhand.

Devprayag is an important pilgrimage site for Hindus. The confluence of the two rivers here to form the Holy Ganges is considered to be a sacred event in the Hindu scriptures.

Devprayag is oftentimes called the home of the priests of Badrinath. These priests are referred to as Pandas and are held in great esteem by all pilgrims. The town of Devprayag is an amalgamation of mysticism and natural beauty which makes it a popular destination for both pilgrims and adventure seekers alike.

Places to visit in Devprayag

Suspension Bridge to see the confluence of the two rivers

Devprayag is primarily known for being the town where the river Alaknanda and river Bhagirathi confluence to form the Holy River, Ganges. To enjoy this majestic site, even more, you can go to the suspension bridge. You can also get a beautiful panoramic view of the entire town from here.

There is no scarcity of temples in a place like Devprayag. The Raghunath temple is a very well-known temple dedicated to Lord Rama. The Raghunath temple’s architecture is a mix of Buddhist and south Indian styles, which is quite interesting to see. The Dashrathshila is another important temple in the Devprayag town that has roots going back to the time of Ramayana. There is a small hill near this temple whereas per Hindu Mythology, Raja Dashratha, Lord Ram’s father performed the atonement.

Established in 1946 by Late Acharya Shri Pt. Chakradhar Joshi, a famous astrologer, and astronomer, this is the first Indian astronomical observatory. The place is very well equipped. Here you will find two telescopes and a plethora of books on astronomy and also the research on astronomy. If this is a subject that interests you or you want to learn something new while on vacation, do give this place a visit.

Activities to do in Devprayag

Devprayag offers a plethora of sightseeing options. This place is called the hub of temples, shrines and pilgrimage sites such as Raghunathji Temple, Dashrath Shila Temple, Kyunkaleshwar Mahadev temple, and many more. All these sites and more have people flocking to Devprayag in huge numbers. Of course, you cannot miss seeing the main attraction or what Devprayag is most recognized for, the confluence of Alaknanda and Bhagirathi into the Holy Ganges. The suspension bridge has been built, so one gets a panoramic view of this beautiful site.

All you adrenaline junkies and thrill chasers would be glad to know that Devprayag offers some great spots for river rafting. This is an activity best done with your group of friends or family. There are professionals present at all times, which will make sure that you are completely safe. Tourists usually like to go river rafting between Devprayag and Rishikesh which has some medium to rough rapids.

This is a little different than the usual adventure activities tourists usually go for. Devprayag offers you, Flying Fox, wherein you are harnessed to a wire or a safety gear and once ready, you are released to enjoy flying. The speed of your flight can go up to 150 kilometers per hour.

Devprayag is a preferred destination amongst people almost throughout the year. The summer months are especially more pleasant while the winter months in Devprayag see snowfalls, which also drives a lot of people to it. Unlike most parts of Uttarakhand, Devprayag sees the light to moderate rains and so one can even visit this place during the monsoons but should just practice extra caution when they are on foot.

How to reach Devprayag

Most people take trains or flights to Delhi before getting in a cab or a bus to Devprayag. Lots of buses ply between Devprayag and other major destinations of Uttarakhand like Roorkee, Rishikesh, Haridwar, and Mussoorie.